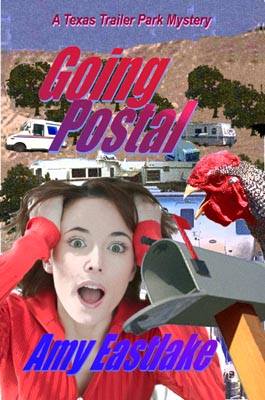 No portion of this novel may be duplicated, transmitted, or stored in any form without the express written permission of the publisher.

Warning: The unauthorized reproduction or distribution of this

including infringement without monetary gain, is investigated by the

This is a work of fiction. All characters, events, and locations are fictitious or used fictitiously. Any resemblance to actual events or people is coincidental

The speaker was a teenaged boy, maybe fifteen and angry with the world. His greasy hair hung down over his face under a ratty hat advertising Japanese animation. "This dog" was Andrew, a Dalmatian that lived about four blocks away. "Post office lady" was me, Kimberly Walsh, postal carrier.

I didn't recognize the kid but I knew the dog. Andrew had never bitten me but not through want of trying. And rumor had it he'd bitten several of my predecessors--including one the previous week while I'd been out on vacation.

"That's Andrew." I stepped away from the animal. Andrew had been prancing around, happily but when he heard me speak, he growled and lunged. "He lives over on Clinton."

"Good." The kid shoved the end of a gnawed rope leash my direction. "I've got stuff to do."

Andrew almost got me that time, but I stuck my leather postal bag in his mouth and he worried at it, possibly thinking he'd finally reached his dream.

"I'm a postal carrier, not lost-and-found." It was too late. The kid took off down the street leaving me with a hungry looking Dalmatian.

"Well, Andrew. I guess you'll have to come along with me while I finish my route."

I wasn't especially worried. Escaped dogs are just part of a letter carrier's day. Andrew, though, had never strayed so far from home. I tugged on my bag, then showed him my pepper spray.

Andrew growled at me but he didn't seem to have his heart in it. After a couple more chomps on my bag, he pulled on the leash to water a fire hydrant and trotted up exactly as if he was out for an afternoon walk, practically dragging me behind him.

In the suburbs, postal carriers drive from house to house, leaning out the doors of their vans to slide mail into oversized mailboxes. In the city, where I worked, we walk. Lots of carriers prefer the driving, but not me. I'd spent enough years locked in darkened cubicles during my corporate America days to appreciate a job that lets me be outside, getting paid to get my exercise. Of course, by the end of August, I was ready for a break in the heat. Texas summers last about six months with both heat and humidity averaging in the nineties all that time.

All of which meant He got to bark at every other dog in the neighborhood as we walked, and he was prancing with his tail held high before we'd finished on Edgefield and I was ready to drop him home on Clinton. As I headed for my van, we left behind a cacophony of barking so loud the sound set off a couple of car alarms.

Sean Herbert, Andrew's owner, lived in a two-story half-timber house built in the 1930s when labor was cheap and architectural frills were considered clever. It looked like Hollywood's version of the house where grandparents would live.

In this case, looks were deceiving. Like many grandparents, Sean kept his windows covered. Unlike my grandparents, he didn't do it to protect the antique velvet of Victorian furniture. He used the darkness to hide his secrets.

I knew Sean well because he was a major eBay dealer, always shipping and receiving merchandise. But eBay was his hobby--his real job was drugs. He supplied much of the south Dallas market for Ecstasy, illegal steroids, amphetamines, and other manufactured drugs I'd never heard of. Everyone in the neighborhood knew about Sean's business. But the cops had never found anything and after a few raids, they'd given up and waited for him to mess up. Which he hadn't. Yet.

I pulled my van in front of Sean's place.

Andrew lunged for my hand off when I reached for his leash but I was ready for that trick. I showed him my pepper spray and he backed off quickly. Postal carriers can't take guff from dogs.

Andrew looked nervous when I tugged him up the pathway to Sean's place, his eyes rolling back a little and his breath coming even faster than normal for an August heat wave. I would have thought he'd be happy to be home but maybe he and Sean were on the outs. I'd call animal control if Sean looked like he was going to give Andrew a rough time. Not that I liked the dog--still there are limits.

"Almost home, buddy," I told him. He hadn't bit me yet so we were good friends.

Nobody answered when I leaned on Sean's doorbell.

That wasn't strange--if I were in the drug business, I wouldn't hurry to answer, either. I opened his screen door and banged on the solid steel door behind it.

When that door swung open, I realized what I should have an hour earlier when I'd first found Andrew loose--something was wrong. Sean would no more have left his door ajar than I would go outside without my sunscreen.

The day's mail was piled inside, under his mail slot. That wasn't like Sean either.

I pushed past the mail, stepping a few feet into his hallway. "Hello? Mr. Herbert? Sean? It's Kimberly Walsh, your mail carrier. I found your dog."

From somewhere, I heard the sound of water dripping, the buzz of an air conditioner pumping out chilled air. No reply.

Andrew tugged on his leash but I didn't let him go. For the first time ever, Andrew felt more like an ally than an enemy.

This wasn't my job. I delivered the mail. Snow, rain, or heat of day--that kind of stuff. I didn't want to see what Sean had in his house. If I spotted any drug paraphernalia, I was supposed to report him, but a postal worker who turned in people on her route got unpopular real fast.

I decided to compromise. I would walk to the stairwell and shout up the stairs. If Sean didn't respond by then, I'd call animal control and let them take responsibility for Andrew. I wouldn't win any popularity points for that, but I was too scared to care. Something was wrong and Sean might have set booby traps set for unwelcome intruders.

I kept my eyes forward as I stepped down the hallway. I opened my mouth to shout but Andrew beat me to it. He gave a wail of absolute anguish, and jerked on his leash.

I had been trying not to look but I couldn't help it this time. We'd found Sean.

Sean had been a good-looking guy. Early thirties, like me. Not too tall, maybe five nine, but in good shape, with jet-black hair and piercing blue eyes. Now, that good-looking body draped over the foot of the stairs, his face distorted by pain.

Blood, black in the dim light of his house, covered his white t-shirt and the beige carpets of his landing.

I bent and felt for a pulse.

Instead, I discovered that Sean's body had cooled to the air-conditioned chill of his home.

Andrew sniffed at his master's body and whined--an almost human sound of grief and loss. I yanked the dog away quickly away. Seeing Sean dead couldn't be good for the pup. Besides, Sean wasn't a drug dealer or dog owner any more, he was evidence. I needed to make sure that neither I, nor the dog, disturbed it.

He gave me a quizzical look, as if asking, "What's this we stuff?"

I may be blonde, but I managed to remember the numbers to 9-1-1. The police told me to stay put, not to touch anything, but to see if C.P.R. would help.

I knew Sean was way past C.P.R., but checked anyway. Mistake--one look at the deep gash on Sean's throat and I fainted.

We hope you've enjoyed this free excerpt from GOING POSTAL by Amy Eastlake. You may purchase the complete eNovel, in HTML, Adobe Acrobat PDF, Palm DOC, Mobipocket, Sony Reader LRF, ePub and Microsoft Reader formats for only $3.99 by clicking the Buy Now button below.